So I can admit I was wrong about the Conjoined Creations' Flat Feet yarn. After the first few rows of ribbing were over, the kinks in the yarn did not bother me as much. I think it just took me a while to get used to them. I personally prefer bamboo dpns for use when knitting socks, but it definitely took some metal needles to knit with this yarn. Everyone is different and has differing knitting styles, but the knitting went really slow with this yarn and bamboo dpns. I would definitely get this yarn again for a change of pace; it makes a really cool knit fabric. I'll put up pics of the socks later this week so you can see what they look like.

If you are on Ravelry and go on the forums occasionally, then you might have heard comment about the first-ever Wollmeise sock club, offered through the Wollmeise shop. I personally did not enter the lottery drawing, namely because I can't justify spending 200+ in one swoop, even though I have spent that at my local LYS:-). I recently got a skein of Wollmeise in the Rhabarber colorway, sold to me by a generous fellow Raveler. Though I was really excited to finally get one skein of the coveted Wollmeise, I can safely say that I will NOT be stalking The Loopy Ewe or the Wollmeise site when there are shop updates. It's not that I am dissing the yarn, but there are other yarns I definitely enjoy more. The colors are rich and beautiful, but I'm not head-over-heels for the yarn. Everyone has their favorite yarns, and I'd rather spend my money on indie dyers from Etsy, where one can get one-of-a-kind yarns in colorways that are rare. I just have never been one to "need" the latest trends. For the record, I am not slamming Wollmeise, it's just my opinion.
Posted by Suzie at 5:55 PM 3 comments: 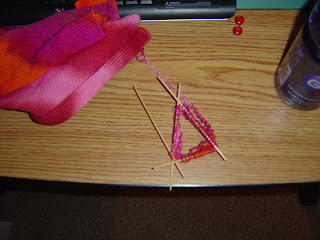 Knitting it seems to take forever...I've only made a couple of inches of progress. Maybe I will feel differently once the socks are on my feet.
Note: I decided to use the Flat Feet in lieu of Silk Garden Sock....which is still calling to me from the stash. I really want to use a cool pattern for the Noro...any ideas?
My latest order from The Loopy Ewe arrived today. On Monday, I ordered a skein of Lime and Violet Intention sock yarn, on the Sasquatch Sock base. OMG, it looks awesome! It is the perfect blend of my current favorite colors. 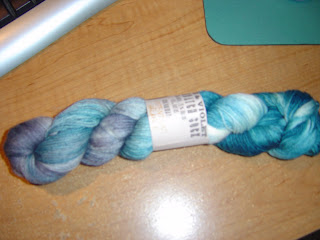 Still battling my sinus infection, but hoping to be back on all 8 cylinders by the beginning of next week.
Posted by Suzie at 8:40 PM 3 comments:

I'm really trying to knit from my stash, but.... 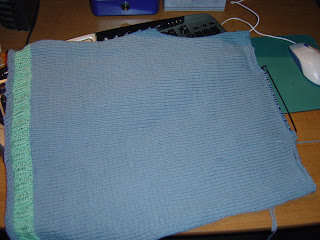 The sweater I'm making for Charlie (my son) is going really well. I finished the back, as you can see in the picture. It never fails to amaze me how fast I can knit a project up if I'm only working on that project.

The basketweave scarf made of Adriafil Carezza has found its way back into the needle/notion box, where I won't have to look at it for a while. I used to be in love with basketweave patterns, but after 2 scarves for my mom and sister, I got really sick of it to be honest. Who knows when that scarf will be done? at this rate, maybe never.

I have an upper respiratory infection (AKA really nasty sinusitis) complete with a sore throat. So that means I have been getting a lot of knitting done because my husband rocks!

Over the past couple weeks some new yarns have joined my stash, despite my best efforts to knit only from my stash. I'm not trying to make the stash smaller(heaven forbid) but I am trying to make room for more sweater yarn and more sock yarn. 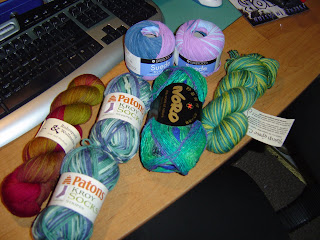 A fellow Raveler generously sold me a skein of WOLLMEISE!!!! I'm so excited...Its in the colorway Rhabarber. I've been lusting after a skein of wollmeise forever, but have always been too late to the sneakup/shop update party. I picked up 2 skeins of Patons Kroy Stripes. I love the fact that my local Hobby Lobby now carries sock yarn. I got a skein of Noro Silk Garden Sock. 2 skeins of Berroco Suede tricolor for a wallet for myself. And last but not least, Tuscan Grove sock yarn.

Cider Moon, purveyor of sock yarn awesomeness, disappeared off the map last year, right as I discovered them. I managed to get 2 skeins of Glacier sock yarn, but alas I could not get anymore after that. I was in Knitters Mercantile (Columbus, OH LYS and in fact my LYS of choice) and saw that Gail from Cider Moon had begun a new venture, Tuscan Grove yarns. I'm really hoping that its as awesome as Cider Moon was--the texture(base yarn) seems to be more like Cider Moon Flurry. I met Gail at Knitters Connection in 2007 and she is such a nice person!
Hopefully I will get to knit some socks soon--I'm really into this sweater-knitting phase but my first love is socks!
Posted by Suzie at 12:45 PM 3 comments:

I had a productive weekend, although I managed to come down with a cold while in Cleveland visiting my parents a couple weekends ago. Despite feeling yucky, I got to work on my son's star sweater from Zoe Mellor's book Adorable Knits for Tots. It is chock-full of cutsie patterns for boys and girls and I would love to have the time to make them all! The only thing that bugs me is that the patterns basically stop at the size for a 3-4 year old, which my son will be approaching in a year! I just do not have the expertise/time at the moment to do the math to adjust for a larger size...maybe someday.

I'm doing the sweater in Lion Brand Cotton-Ease and Knit Picks Shine Sport. The white star will be in RYC Cashsoft DK. Despite hating the Debbie Bliss Cashmerino line with a passion, the RYC (by Rowan) is actually working out quite well for me. I used the Cashsoft Aran before on a hoodie I made (and frogged) and had minimal pilling.

Also OTN as of tonight, a baby bolero from Leigh Radford's One Skein. Worked in RYC Cashsoft Aran in Foxglove (sort of a lilac), this is a little gift for my niece Brianna Grace, arriving at the end of December! I should have pics up by the middle of the week or so.
Posted by Suzie at 12:59 AM No comments: 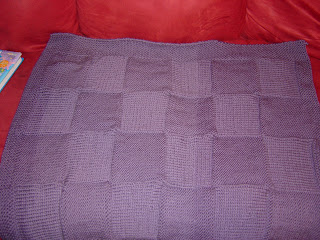 I finished my niece's baby blanket today! It is probably the first extremely long project that I have completed. It got really heavy after the first 2 rows of blocks, and even traveled with me just so I could work on it!

I'm really proud of it, even though I will never work with Debbie Bliss Cashmerino yarn again. Out of the 8.5 balls I used, 2 had knots in them and 1 had multiple knots. Also, parts were dyed wierd in places. And it pilled, but I'm sure anyone who has ever used DB yarns knows that is common!

Next up on the needles: continuing my sons star sweater from Zoe Mellor's Adorable Knits for Tots.
Posted by Suzie at 5:27 PM 2 comments:

The baby blanket that I have been working on is (almost) done. Pictures will be up very soon. Also, just found out that I will be welcoming a niece in December. I'm so excited to be an aunt. Congratulations to Billy and Amber!!!
Posted by Suzie at 2:44 PM 1 comment:

And the winners are....DoveKnits (Farmhouse sock yarn) and Wendy (Yarn Love Juliet). Please email me your addresses if you read this before I message you on Ravelry. Look for another contest in the fall..
Posted by Suzie at 3:45 PM No comments:

It's time for a summer blog contest!!!! 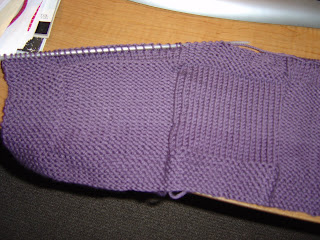 So I am coming along pretty well on the baby blanket for my niece/nephew. It is probably the best knitting I have ever done. It's even, gauge is right on, and it looks really nice *IMHO*. The pattern is really easy, but in a way that is pleasing to the eye. The pattern is by Ann Norling, and is titled, "Big Blue Blocks." The blanket I am knitting is royal purple, which is pretty gender-neutral. I couldn't fit the whole blanket in the picture, so that is just half of it.

I never used to think that using nicer (read: more expensive/higher quality) yarns made a difference as to how one feels about the knitting project, but now I see how that is true. I bought 10 balls of Debbie Bliss Cashmerino Chunky totaling about 95.00 give or take. I really wanted to use a nice yarn because what I knit is a reflection of me, and I want my niece/nephew to have something nice that I made for them. I enjoy knitting this blanket partly because the yarn is so yummy! I ordered a couple cute outfits for the new baby and will present the blanket when I give the parents the outfits. I've made pretty good progress on it because I have put other projects on hold.

I also bought some sock yarn when I bought the last of the Cashmerino(couldn't help myself) and I got to visit the Yarnmarket warehouse! I was in a warehouse full of yarn for about 20 minutes! I wanted to take it all down and roll around in it...I loved it! I'm surprised I didn't spend more....I bought 2 skeins of Lorna's Laces Shepherd Sock in Liberty (color 1776).
Posted by Suzie at 11:56 AM 4 comments: